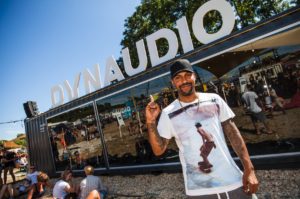 Ever wanted to play to 100,000 people? Dynaudio and The NAMM Show make it possible.

Danish loudspeaker specialists Dynaudio and The NAMM Show are giving unsigned artists the chance to get their big break – free of charge, with zero strings attached – at the January 2019 gathering of the global industry.

Want in? All you have to do is sign up at www.dynaudio.com/unheard for your chance to secure one of 12 coveted slots during The 2019 NAMM Show, January 24-27. It’s open to solo artists, bands, a cappella groups… anyone, as long as you’re musical and there aren’t more than six of you.

The Dynaudio Unheard studio is a state-of-the-art pop-up recording facility built inside shipping containers and containing the latest tech from the world’s best equipment makers. And it’s touring the world searching for the best new artists.

But it’s more than just a studio: one whole side is glass, so everyone outside can see in, and everything that happens inside is piped out through a powerful front-of-house system, so they can hear it too. That’s plenty of exposure… but it’s just the beginning.

If you’re successful in your application, you’ll get one hour of recording time in a live session – plus mentoring from award-winning producer and mixer Ashley Shepherd (Peter Frampton, Blessid Union of Souls); the masters and film of your session to take away and use however you want; and promotion on both NAMM’s and Dynaudio’s social networks. You might even get an on-camera interview about you and your music.

It’s all free of charge, and without any strings attached. Yes, really. Everything you record in our Dynaudio Unheard studio is yours to keep. You can use it just as you see fit to promote yourself.

Dynaudio Unheard will also help you in your quest to conquer the music world by promoting your appearance through the company’s communication platforms. And because we’ve also teamed up with TIDAL, you could also see your performance and music appear on its global streaming service. That’s potentially millions of extra pairs of ears to wrap themselves around your material.

Wait… so there’s really no catch?

Not a single one. We’re doing this because a staggering 91 percent of all artists are completely undiscovered. That’s outrageous. And we think something needs to be done about it.

We can’t help but think of them all, tucked away in rehearsal rooms, basements, bedrooms and garages. They’re creating, and sweating, and believing. They’re on it. And no one knows who they are.

We want to give that 91 percent the opportunity to level the balance.

We aren’t going into this blind. Dynaudio has almost four decades of experience in the professional world – from some of the world’s biggest and most famous recording studios to small bedroom set-ups. Think of your favourite record: chances are that some of our products were involved in its production. Dynaudio speakers reproduce exactly what the artist intended. Nothing more, nothing less. They always have.

But we don’t just sell loudspeakers. We work alongside artists – sharing their happiness, their love, their pain and their struggle. Dynaudio, working in close partnership with NAMM and TIDAL, are beyond excited to be able to play a part in helping those musicians realise their dreams.

Sign up and read more about Dynaudio Unheard at www.dynaudio.com/unheard

Learn more about The 2019 NAMM Show, the global gathering of music, pro audio and event technology industries at www.namm.org

Dynaudio was founded in 1977 in Skanderborg, Denmark. Today, it’s recognised as a leading manufacturer of high-quality audio systems, and one of the world’s most distinguished high-end audio companies. Dynaudio designs, engineers and manufactures dedicated systems for professional studios, as well as car audio and home hi-fi and consumer loudspeaker products, from its state-of-the-art facility in Denmark. The company is particularly recognised for its advanced driver technology designed, engineered, and continuously developed in-house, not to mention its furniture-grade, handcrafted Danish cabinetry.