Yes, that’s my Godin guitar on my shoulder. I don’t normally expose it to the desert sun, but this was for a publicity shot earlier this year and, well, the guitar looks great.

I purchased my Godin after seeing the great Doyle Dykes demonstrate a similar guitar during a mini concert in Vancouver, B.C. in 2016. There were about 30 of us gathered inside the Prestige Guitar shop and we were blown away by Dykes’ playing. At the end of the night the guitar players in the crowd felt one of two ways: Either you felt inspired, or you felt like going home and burning your guitar because you knew you could never play that well. I was inspired and I bought my guitar a couple of days later.

My particular Godin is similar to the Doyle Dykes Signature model, but mine has a 13-pin output. It’s really a guitar that’s the best of both worlds. It’s a GREAT electric guitar with all the bells and whistles, but I can also play it unplugged and it sounds terrific.

The 13-Pin output allows me to plug into my Roland GR-55 synthesizer. This was a huge selling feature for me. I have keyboard synths and they work well, but I’m a better guitar player than I am a piano player. 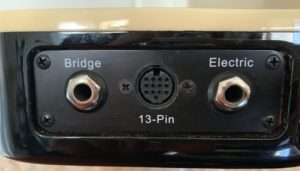 In the photo on the left you see 3 outputs on the bottom of my guitar. Use the “13-Pin” output to connect to a synthesizer (in my case the Roland GR-55 (see separate review) or any other 13-pin device. Use  the “Bridge” output to “blend” a natural guitar sound with the synthesizer sound using slider controls on the front of the guitar. Push the slider all the way down so that no synthesizer effects are heard, or all the way up so that only the synthesizer effect is heard. It’s fun to find the right blend for a specific song or mood. The “Electric” output is for when you want to plug the guitar straight into an amplifier.

I use two guitars when I’m playing live: the Godin and an Ovation. When I use the Godin through the GR-55 I can make it sound like we’re playing in Yankee Stadium, even though we’re actually playing in a local dive bar. Sometimes I use the Godin and GR-55 to provide a “brass section” or a string pad that makes the band sound bigger and more versatile.

I use the Godin even more in my studio. For example, I can add a little accordion flavor a la The Band (Garth Hudson, The Band’s keyboard player, in fact played accordion on one of my songs a few years ago: “Wild Child” from the Trick of the Light album). I love recording Chicago-style horn parts using the Godin and the GR-55. There are literally hundred of sounds at your disposal, via the GR-55. If you’re looking for quality digital patches that sound authentic and if you’re a better guitar player than a piano player, the Godin and GR–55 combo is just the ticket.

But even without the GR-55, the Godin by itself is a joy to play. I love the feel of the fretboard and the acoustic, unplugged sound. It is the best guitar I’ve ever owned.